Developed in the hills of Logan West Virginia in the 1930s by Marshall Cletis (M.C.) Byles, better known as “Radiator Charlie.”  He started working at the age of 4 picking cotton and never went to a day of school in his life – but he showed true American ingenuity. He tinkered with cars, farm equipment, and tomatoes and it shows in his Mortgage Lifter Tomato. Developed in the 1930s by a gardener who planted the four biggest varieties he knew and crossed one with pollen from the other three. He simply crossed German Johnson, Beefsteak, Italian and English varieties and sold the re-selected plants He did this for six seasons and created a variety that produced immense, tasty fruit. He sold the plants for a $1 apiece and paid off his $6000 mortgage in 6 years.

Although many varieties by plant merchants are called “Mortgage Lifter”. ‘Radiator Charlie’s Mortgage Lifter’ is probably the most well-known of all the “mortgage lifter” varieties, Fruits that are large, over a pound each, pink in color, and one of the best-flavored beefsteaks available.

In 1915 a man was born in Ein Ganeem that was later to become Israel that would change gardening in the United States and the world. He attended The Hebrew University before coming to live in the United States in 1936. He obtained his undergraduate degree from the University of California, Berkley, later his doctorate in plant breeding at Cornell.

In 1942 he went to work for Atlee Burpee & Company in Warminster, Pa.; one of the largest seed companies dealing with the home gardener in mind. For eight (8) years he bred many varieties of vegetables. Among them are cucumbers, eggplants, muskmelons, and watermelons. However, his best accomplishment was in tomatoes. Until this time tomatoes had vines fifteen (15) feet in height. This meant a lot of staking and tying to support systems, which meant a lot for time for the home gardener.

He did most of his work establishing inbred lines that would become the perfect parents for the perfect tomato, a lifetime breeding. It was becoming evident that good parents make great children. In inbred lines, the parents are usually weaker and smaller, but when bred to gather the offspring are stronger and better (hybrid Vigor).

In 1948 he produced a tomato that was called Big Boy it was shorter than other varieties at the time. The fruit was a dark red round and about sixteen (16) ounces. It later made it into the Guinness book of records as producing the most tomatoes in one year. This tomato made it easier for home Gardeners to grow tomatoes. It was one of the first hybrids during and after the war.

When Israel was established, (1947) he went back to his home country work at Weitzman Institute of Science in Rehovot, His work was with plants to produce plastics and syncretic fuels. One of these plants was the Castor Bean.

In 1958 he came back to the United States to work at Rutgers University working on his seed collection and a lifetime dream of a new squash.  He thought it to be a crop equal to corn or rice. At 88 he retired and at 89 died living a trail of any new plant accomplishments. Who was this man, Ovid Shifriss

These two common garden varieties of plants seem to be strange equals. Yet we must look back to 1830 when a man was born in Rutland a small town in Tinwell England. He started off his professional life as a solicitor or in America he would be known as a (Lawyer). His interests turned towards horticulture or plant husbandry as it was called then. He started corresponding with Charles Darwin as his fascination with how more precisely plants passed on certain traits to their offspring. By 1858 at the age of 28, he was breeding Peas at a place called St. Mary’s Hill in Stamford. As his creations increased so did his corresponded to Charles Darwin about his outcomes. Darwin made several notations about his thoughts and commented about them several times in his (Darwin’s Notes)

In his breeding process, he used the scientific process and accurately noted all parent’s attributes and how they followed through to their progeny. He first perceived a concept that later has been recognized as hybrid vigor. He watched closely the susceptibility of first-generation and second-generation plants to disease and their resistance to their American counterparts added to their lineage. He bred and back bred to gain the best traits of the American varieties into common English varieties.

He did this without the knowledge of Mendel who in Germany was secluded in a monastery and whose works would later be published. His motivation was to improve varieties, not how genetics worked as did Mendel.

This gentleman and his sons and grandsons produced many varieties of peas that they sold through there store. Along with strawberries, currants and apples. His death was in 1893 but his works live on in one variety of heirloom peas. 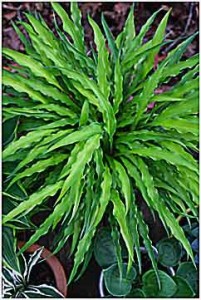 The Hosta of the year for 2016 is Hosta Curley Fries.  In 2008 breeder Bob Solberg introduced this magnificent Hosta.  Its curly chartreuse leaves form a diminutive mound of about 6” high and 16’ high giving it an unmistakable appearance.  It was from a seedling of Hosta Pineapple Upsidedown Cake. The best color comes from growing it in an area that has morning sun with afternoon shade. This is the most distinctive hosta to be introduced in some time with its highly ruffled narrow leaves that emerge yellow and then fade to near white. In midsummer, deep purple scapes emerge on top of the plant with lavender flowers.

Its size and color make it a great plant to grow in a container by its self or with others to make a great color contrast.  In the garden it has great diversity as well; it can be grown in lines or in clumps to insert its stupendous color to an otherwise dull spot in your garden.

This Hosta Curley Fries has all that it takes to be a winner, Hosta of the Year 2016. It is one of the many Hostas that have been introduced by Bob Solberg.  Congratulations to you Bob, and I will add more of your Hostas to my blog. 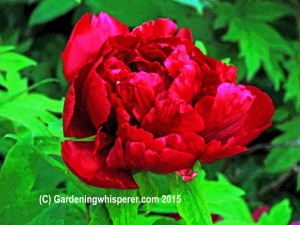 This is my seventieth DECORATION DAY, (yes I know the name has changed) but it has always been a special day as it was the day my mother prepared flowers to decorate the graves of our ancestral history and the forgotten soldiers that had fought to make America free. From where we lived we had to trek in all four directions to visit the many cemeteries and graves this process took about a week to accomplish. I wish I could remember the stories mother told of each person that we stopped by and there location but time has eroded my mind. END_OF_DOCUMENT_TOKEN_TO_BE_REPLACED