At the first job I had as a grower in a small greenhouse in fall, eight (8) weeks till Christmas I was handed a box of plants to grow for Christmas, the label said it they a plant called Lenten Rose. There were little or no instructions just plant and keep cool until they bloom around Christmas. They were added to the other plants I was growing to compete with the Poinsettias that were everywhere in the greenhouse.

This was well before the first perennial boom of the seventies (70’s) and they did well as pot plants but I pinched the remainder of those not sold. If I had only known the value and worth of these plants, I would have put them into the perennial plant section I was growing for spring.

Hellebore is a great perennial, unlike other plants that show well in the summer, hellebore dies back and make great green leaves. In the late fall, new leaves start to grow and the awakening starts to begin. When the snow starts the mass of green leave make quite a show, and then as they are covered with snow they show some dieback.  As the snow melts they start to bloom making a great show of flowers. It is a shame that they are not sold more in garden centers as they are a great addition to the American Garden and can be used as cut flowers in the early spring

A slow grower it will take two (2) to three (3) years to establish once they get started they make grand slight for shade area in your landscape. Be sure to place them so they are visible when you go in and out of your house in early spring. There are about seventy-five (75) varieties in cultivation on the commercial market. They come in singles and doubles. The color range is white, pink, red, black and blotched. Two new varieties from Walters Garden by hybridizer, Hans Hansen, will appear sometime in 2016 look for them. Until then there still many great varieties that can be found. 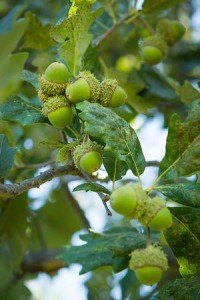 In an age of small dominative plants that do not drop anything on to the manicured lawn of urban America, it is refreshing to see a tree that produces large amounts of acorns being triumphed is astonishing. However, this fast-growing Swamp White Oak was selected not for the urban homeowner but rather for the wildlife and to be used in areas where the is deer and turkey populations abound. The attributes of this new and great tree are earlier flowering and fruiting large number of acorns thus giving wildlife, turkey and deer and waterfowl a good diet of natural food, making this an excellent tree to put into your food plot for the wildlife.

This unique and great find was made by the late Bill Yoder of the Missouri Department of Conservation State nursery. Production and sale of this tree are with forest keeling nursery. It was also found by John Burk, Wildlife Biologist that deer would move past Northern White oak to dine on Swamp White Oak, once again making this a superior tree for attracting deer.

Known as ‘Bucks’ Unlimited Oak, this natural selection offers consistent annual yields with heavy, early production. This beautiful, long-lived oak species will develop a stately profile and live as long as 300 years on a variety of sites from upland forests to floodplains. And, while the main claim to fame for Bucks’ Unlimited Oak is its wildlife-attracting mast, this tree will also produce top-quality timber. This new Find Buck’s Unlimited Oak is a natural selection that will be a great addition to the vast line of Oaks.

Swamp White oaks are a great asset to be used in parks and large areas where their massive beauty can be appreciated.

This was the year of the Echinacea and it has brought us five new Echinacea This plant known as the coneflower has several species native to the North American Continent. Out of several of the species have come 78 varieties. Many of these new varieties look like their native cousins. This year five new varieties have been introduced.

Echinacea ‘Aloha’ is one of the prairie Series from Terra Nova. It is patented and cannot be propagated.   This yellow-flowered and bushy habit has a long bloom period this will make it a great addition to the yellow-flowered Echinacea’s

Echinacea ‘Cheyenne Spirit’ is a seed strain of Tomato red, magenta, golden yellow, fluorescent orange and white. This color range and its growth habit will make this a must-have coneflower to put into a garden next to some grasses. To give it a native prairie garden look. Trouble it is a mix, so getting all colors one must buy several plants.

Echinacea ‘Colorburst Orange’ PPAf is series of coneflowers called Colorburst. This is another outstanding introduction from Terra Nova. This Echinacea has large orange pompom flowers. This is a fragrant variety that attracts butterflies. It is a well-branched plant with an excellent variety of mass summer flowers.

Echinacea ‘Purple Emperor’ PPAF is from the Butterfly series by Arie Blom. It moves into the series with ‘Cleopatra’ and ‘Julia’. It has large saturated magenta-purple flowers. These flowers are born on clumps of bushy green foliage. This plant is stunning in mass plantings.

Echinacea ‘Secret Affair’ PPAF is in the SECRET series of coneflowers. This is another great introduction from Terra Nova. These sizeable flowers stay on from midsummer until late in some areas frost. The coneflower will be great for cut flower bouquets that will enhance any room.

These five new Echinacea’s are a great improvement to the many coneflowers that are already on the market.

While doing research on my article on new varieties I ran across this variety Clematis recta SERIOUS BLACK™ (AKA Clematis recta ‘Lime Close’) (Bush Clematis)—Completely different than all the other Clematis offered, SERIOUS BLACK™ is a bush type rather than a vine type and it can stand up on its own but also is the perfect companion for taller perennials. It is easily grown in decorative patio containers as well. The name SERIOUS BLACK™ references its extraordinarily dark purple new foliage which matures to deep olive green. In late spring to early summer, antique ivory colored blossoms about the size of a nickel appear in clusters reminiscent of Sweet Autumn Clematis. They often reappear in midsummer, blooming on the deep purple new growth, and silvery seed heads follow in fall. You can imagine how the light-colored blossoms jump out against the dark foliage. The effect is stunning and would add great interest to the garden. This would add another purple leaf plant to the garden.

In contrast to bush clematis, also called upright clematis, most gardeners think of clematis as vines that twine around a trellis or arbor, producing large flowers in great profusion. The plants described here are the shrub clematis, which is excellent for the bed or border. Clematis is a Greek word for “brushwood” and refers to the plant’s branches.

Clematis Serious Black is rather new and could be hard to find in the US, so we recommend ordering early to be able to obtain one for your collection.

Digiplexis Illumination “Flame” When something comes along that is different everyone should know. I have seen this plant in several trade journals and it shows great promise. It is from the foxglove family and is truly annual but the flower power that it shows will truly make it a great addition to any garden. It is a plant that was breed by a company out of England called Thompson & Morgan.

Its growth habit is 24” tall and 15” wide with multiple stalks of rose and soft orange-colored tubular flowers that look to be about 8” to 12” long. This plant needs regular water and fertilizer grows in full sun from early summer until fall. Also, I would think that it would need deadheading to remove old flowers and encouraging new shoots to arise from the sides.

Of its many attributes, it is sterile which allows the bloom to stay on longer but I do not know if it will be a favorite of hummingbirds, as they go after the nectar.

It has won several trade awards and I feel it will go on to win more. I am sure other colors will follow. I was so fascinated that I purchased one to watch wow it truly grows. This plant may be one of those plants that show up greatly in beds and borders and will stand out the whole summer.

Watch for this plant in your local Garden Centers and buy one to see how it works in your garden. Remember this plant in Saint Louis is an annual not a perennial

If you know any other information on this plant please add to the blog.